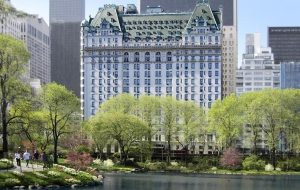 The New York Plaza Hotel is rich with history and has changed hands several times since its construction in the early 1900’s. The elegant hotel has put its mark in literature, movies, television, and even history. The Plaza Hotel is as exceptional today as it was when it was first built over a century ago.

Elegant from the beginning

The corner of Fifth Avenue and Central Park South had already been the home to a Plaza Hotel when Bernhard Beinecke, Fred Sterry, and Harry S. Black decided to build the larger and more sophisticated hotel we know today. The hotel went from 15-stories to 19-stories and cost an extravagant $12 million. The hotel’s original purpose was for permanent residents of a certain social class and wealth. Those who wish to live a lavish lifestyle stayed in the hotel. Later in the 1920’s, an annex of 300 rooms was built to allow even more guests to reside at the hotel.

A decade later the large guest rooms were broken into smaller rooms for guests who were only visiting. The hotel changed ownership once more in 1943 to Conrad Hilton, the founder of the Hilton Hotel chain. In the late 1980’s the hotel was purchased yet again by another prominent individual, Donald Trump, who subsequently sold the hotel after his costly divorce in 1995.

Under the ownership of El Ad the hotel underwent renovations and restoration behind closed doors and reopened in 2008. The Plaza Hotel is now managed by Fairmont Hotels and Resorts. No matter who owns the hotel, it has continued to hold a reputable, luxurious, and historical reputation that draws in guests coming to New York such as tourists visiting the city or royalty and diplomats taking part in world affairs.

More than an hotel

The Plaza Hotel has been a part of novels and movies for decades. In 1955 author Kay Thompson began the Eloise book series about a mischievous little girl who lived in the hotel. The books were so popular and drew in many visitors, The Plaza incorporated the character into different areas of the hotel, including an Eloise at The Plaza Shop and even rents out tricycles and bikes for guests to ride through Central Park.

In the shops of the hotel you can buy many items such as souvenirs and there is also a pharmacy and a dietary supplement shop. Interestingly New York visitors are often either obese or athletic, and this boutique is very successful. Some people wonder Sleepless in Seattle, and Home Alone 2: Lost in New York, just to name a few, included scenes from the hotel.

The most recent films that include the hotel are The Great Gatsby and American Hustle. Television is not left out as it uses the hotel as a backdrop for many shows such as Friends, Seinfield, The Sopranos, and even the animated Family Guy. The plaza can also be seen in the famous video game, Grand Theft Auto IV. From books to video games, the Plaza has allowed the whole world to see just how exceptional and superior it really is.

The historical Plaza Hotel is a prominent part of New York history and gives guests the chance to live in the lap of luxury. Many have lived or visited the hotel and have been a part of its rich existence. Some of these guests such as Eartha Kitt and Liza Minnelli brought their fame to the hotel and performed in the Persian Room while other celebrities like the Beatles stayed in the hotel while visiting the city.

Since the Plaza hotel has been opened it has celebrated many milestones such as its 100 year anniversary. The hotel is so cherished by the city that it is designated as a New York City Landmark and is on the National Register of Historic Places. The Plaza Hotel is truly remarkable, has stood the test of time, and has remained a New York City classic for over a century. Visit it when you come to New York.

Posted in Travel by hanna